Well, Monday 27th February, and I am in my new Armadilla Garden office.   Unfortunately, still no electricity, and the guys couldn't make it for the final work & snagging, but I decided with the battery life of my Mac Book Pro, and a wifi connection that was working from the office, I could work down here.

The wood burning stove fired up nicely. Only a 4Kw Windy Smithy LOUIS Clarke Thames 4KW unit, but plenty for this small office.  Just a small fire today to check it draws ok, and to take the chill away to work.  1 hour after lighting and the office is fine already.

The Armadilla still needs a bit of leveling.  It is down about 5cms front to back and 4cms left to right. That is easy to do with a jack and bits of wood.   For now, best work to one side of the office so as to avoid rolling sidewise while working! 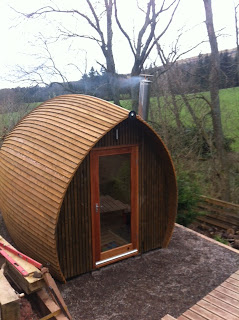 Over the last week, Armadilla's team have been preparing our garden in readiness to receive a A12 Armadilla Garden Office.  Yesterday, Friday 24th Feb 2012 the base was completed, at around 8:30pm that evening, Ross arrived with the Armadilla securely tied to a trailer; 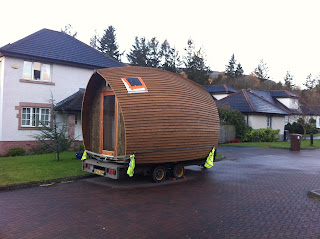 The task for the day was to move this 1600kg structure over our house, and down 2 tiers of our terraced garden;


The weather again returned to wet and miserable, making moving around on the grass difficult.


I will post a video of the exercise in the next couple of days, but here are some photo highlights...


Some snagging and tidying up to be done.  The electricity supply has to be connected, and a deck extension prepared.   The bulk of the work is now done.

The Armadilla is looking stunning.  Looking forward to setting up the office contents and getting settled in!

Many thanks to Archie, Ross and the staff at Armadilla.   An excellent job, and a perfect result.

Busy day preparing the base again. Weather was good. Dry all day.

The base is now installed with 2 tonnes of gravel shifted from the front of our house down to our platform.    Another 35 or so coach screws installed to secure the sleepers.  I will be adding a few more as soon as we find a supplier in Stirling!

Mid afternoon, Ross arrived with the equipment to help with the lowering of the office down the garden.  The drop from the middle to the lower tier is very steep... 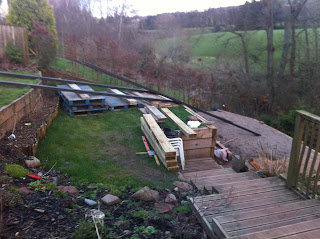 Going from the grass on the left looks ok. A bit of work to lift the office onto the ramps... and then a lower job to get it above the pallets... Then.. the tricky part...  The slope doesn't look to steep from this picture...  Lots of help hopefully ensuring it doesn't slide too far down the garden.

Looking forward to the big lift with the crane tomorrow morning!

I have been a fan of Peter Green for many years.  In my mind, for a short period of time during the last 60's he was the best rock blues guitarist ever.   Back then, he played for the pre-Rumours Fleetwood Mac.

He was at his best playing guitar and singing solo.  One of my all time favourites is a rather rough, black and white youtube recording of him strumming his famous Les Paul guitar, and singing the blues;

The guitar he is playing here is the famous gold Les Paul that he later gave to Gary Moore.  The guitar was famous partly due to a manufacturing fault that gave it a unique sound.  One of the pickups was wound in reverse giving it a particular sound when played with across 2 pickups.  Having said that, the real reason for the unique sounds was Peter Green himself.  He had a unique ability to adjust the volume of his playing - a sort of less is more thing.

Watching him in this clip, it is hard to believe that only a few years later, he would be committed to a mental institution.   Sadly, the guitarist who played with Peter at the gig in the above video - Danny Kirwan-  dropped out of music and was homeless for a while. I have read he is now happily living in Sweden. Anyway, here is another video with Peter and Danny playing awesome dueling guitars;


Notice that during this video, Danny breaks a string mid way through.  You would hardly know. He manages to work his way around the string.  Peter Green mentions this as his reason for playing solo later.

As the song goes, 'what a difference a day makes'.   Today, Archie and his son Ross were up with 5 men to help complete the leveling work.   Once again, the weather was pretty awful, but at least it was warm - 14'c and the heavy rain stayed off.     We were short of coach screws - those muckle great M10 x 15cm things.  Unfortunately, Stirling as a whole was only able to supply 20 (screwfix).   More arriving tomorrow morning.

As before here are a few pics of the progress made today. 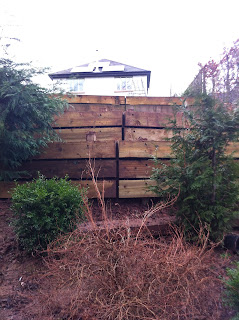 The lads did a great job today.  Tomorrow, just a case of further leveling - possibly adding some more soil, and then putting the gravel down to create the actual office base.

Saturday morning is the lift.  All going well - I should be sitting in the office Saturday late afternoon!

Another miserable day for the lads.  All of the posts are now fully in, and the first of the sleepers have been been taken down from the old retaining wall, and is ready to attach to the new posts;


The sleepers will be coach screwed onto the posts tomorrow - Thursday, and then on Friday, the big job of leveling the ground with 2 tonnes of gravel will start (and finish).  Ideally the sleepers would go on the inside... but, as all of the other retaining walls are the other way round, it would look odd.

At least the weather for Friday is looking better, and for the lift on Saturday morning.
Posted by Doug Bain at 4:47 PM No comments:

Weather not so good today, but Archie's men were out none the less.  After some discussions it was agreed on the best approach to tackle the nasty slope - go deeper! and spread the drop in height across 2 retaining walls at the top and bottom.

Lets hope the weather improves for tomorrow. The forecast doesn't look great until Friday when the office is due to be craned over the house.
Posted by Doug Bain at 5:51 PM No comments:

Ok - here is the first of my 'progress' postings on the installation of my Armadilla Garden Office.

As mentioned in my earlier post I have decided to invest in a Garden office.   This is/was scheduled to be delivered this week (w/b 19th Feb 2012).

In preparation for this, Archie Hunter sent out a couple of chaps to help prepare a base for the office, on our tiered garden slope. Just bought one of these Ethernet over Power adapters.  Works nicely.    In fact, better than nicely.  Plugged in the device that sits next to my ADSL router... connected it via the supplied network cable...  Then.. find a spare power socket somewhere else in my house.  Started my Mac - found the Wireless network... entered the WIFI key.. and away I am!

I went for the Devolo starter pack.  Worked out at about 90GBP / 140USD.   We will see how well it works at a greater distance once the office goes in (hopefully next week!)

Well - I have found a bank that seems to, sort of.. work.  No bank is perfect.   That especially applies when attempting to work globally.

"Welcome to HSBC where nothing is easy"


So - personal and business bank accounts open - after making a trip in person to the HSBC bank in the US.


So - 10am. Sunday... accessing internet banking to perform a global transfer...  I discover the first thing that is not easy.

On the plus side - I am able to see all of my funds in all of my accounts - UK and US at the same time.   And, excusing the problems of systems availability above, I am able transfer funds between the US and UK the same day for no fee's (premier).   I am dinged for currency exchange charges - but that is the norm.

Anyway - HSBC seems to be the best of a poor bunch.. so I am going to keep working with HSBC.

Email ThisBlogThis!Share to TwitterShare to FacebookShare to Pinterest
Labels: Banking


I have been a fan of Nick Drake for about 7 years. Strange, considering the fact that he committed suicide in 1974.

This evening, I am listening to a BBC Radio program recorded by Brad Pitt in 2005. Obviously Brad is a big fan, together with other famous folk such as Heath Ledger,  Paul Weller, Norah Jones and Kate Bush .

I first became hooked on Pink Moon. There is absolutely nobody else like him.  He has a strange haunting voice that has deep feelings. For anyone that has any kind of aspirations to play acoustic guitar, then they will find the skills and beauty of his playing difficult to fathom.   I cannot think of a better acoustic guitarist.   Most guitarists play specific chords in standard sequences, plucking notes etc.   Nick Drake seems to play songs that you wonder how they ever developed.. but after 2 or 3 listens, they just work so well.

Unfortunately, no videos exist of Nick Drake - all we have are his 3 albums, some compliations and a few youtube videos made up with collages of his photos.    One of my favourites is Road;


For those that want to attempt to play this, I believe the tuning is DGDDAD with a capo on the 4th fret.   His most well known songs are Pink Moon itself and Riverman -->


Hope you can enjoy his music as much as I do.

Email ThisBlogThis!Share to TwitterShare to FacebookShare to Pinterest
Labels: Music

I have worked from home for over 15 years.  Although, yes, until recently I did travel a lot. 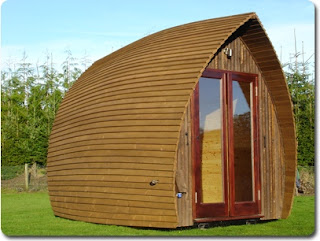 One of the disadvantages of working at home is the fact that the boundary between work life, and home life becomes increasingly blurred.  In some ways, it becomes less stressful to travel where at least at the end of the working day, I would actually leave the office.

To counter this, and to coincide with a restructuring of my business, I made the decision to invest in a garden office.

Mine will not be blue, but rustic... but it will be similar in shape and size.

This is scheduled to be installed mid February 2012.  I intend keeping a diary /vlog of the installation. Check back for further info!